“Two is one, one is none” algebraically equates to “two is none.”   I call rubbish on the whole idea.  When I was younger, I would have been a great boy scout.  I was always prepared, because I always had everything.  I’m now triple the age which strangely, simultaneously shows both how old and young I am.  I don’t like carrying everything everywhere anymore and my experience is I always take to much anyway – “if you’re not worrying about the ounces you’ll be crying about the pounds.” 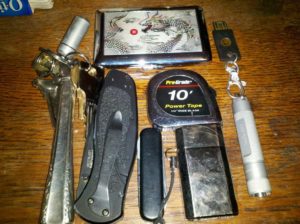 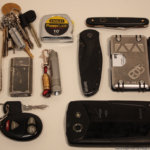 For my daily EDC, there’s a few things I always carry – cellphone, lighter, flashlight, tape measure, knives, and wallet. My keychain is kept light, both by pairing back the keys and modifying them to be smaller.  My EDC today is almost exactly the same as my EDC from 2015.  This is tried and true gear, tested, and carried for over 20 years.  I have quite a boring life – back and forth to work.  If I do find that I’m missing from my daily carry, I can either buy it, borrow it, or wait it out.

I feel like building is a “true EDC” is fairly easy, assuming you can follow step 2 of the steps below:

Building a kit … organically is much harder for me.  I tend to get an idea to build a kit for something, then start adding extra crap without having used the kit.  A specific example of this would be when I built a fairly expensive kit of tools to take shooting when I realized that 95% of my practice is done no more then 5 minutes from my work shop.  I don’t need a socket set and allen keys and more – I need to walk back in the house, lock it in the bench, and start working.  Oops.  Even the volunteer kit for my ham club suffers from to much rule one and not enough rule 2.  My shack in a box kit and my desk tool kit is being built with a different mindset of that experience.

But what about kits that God forbid you use?  I carry an an IFAK (Individual First Aid Kit) after deciding that having a CCW and not carrying an IFAK was a tad unreasonable – I’ll go out on a limb and say that using a IFAK is the more likely of the two and the least restricted as well.  How do you test and prove what is needed?  The best suggestion I have is to follow the guidelines of Tactical Combat Casualty Care.  There are a number of companies that will sell you a kit.  I recommend going with kit from ITS Tactical (as I’ve used their customer service which is top notch). I’ve heard good things as well about Dark Angel Medical’s training and Kits.  Buying kits from either will provided you with the enough to handle the two main “field killers” – extremity bleed out and chest wounds.  If you’re worried about how guns kill people learn how to save them, or at least keep your own ass safe.  The mind is the ultimate weapon, and the director of all else.  Returning fire is another mindset all together.

I wrote the previous paragraphs to set the stage to discuss duplication in kits.  I keep both travel sized Tylenol and a travel sized Motrin in my dopp kit.  I’ve also added them to my IFAK to make it more practical to it being part of my extended daily carry.  Another duplication I often see while traveling or building a kit is pens & pencils, and knives.

My concern with duplication is several:

With that in mind, I try not to duplicate items in my carry unless there’s a significant reason to do so.  Originally I thought that I would end up removing the pain relievers from my IFAK, but now I’d pull them from my dopp kit first.  If I go anywhere with a bag, I grab my IFAK.  This means if a headache (as I usually get on Saturdays) decides to be worse then usual I’m prepared regardless of if I’m traveling or partying.  In this case, I’d argue that duplicate them isn’t a bad idea as they are both consumables.

I wish I could submit to you, the readers of the blog, a good rubric for when and why to duplicate an item, but I can’t.  In the end, I can only reference the three steps and suggest that you, as the minder of the ounces and carrier of the pounds, be ruthless when deciding what to remove from your bag.  For most of us, if there’s a real problem a quick stop to Walmart or Target and you’ll be back in business.