This is a sling shot I made earlier this year after viewing and then probably becoming addicted to Joerg Sprave’s slingshot channel.  It started with his video of launching a machete from a slingshot crossbow.  You can find Joerg’s blog at http://slingshotchannel.blogspot.com/.

I have no intentions (right now) of doing something as crazy as his machete launcher.  Perhaps not least because its really freaking cold out right now.  To cold for rubber to function properly. 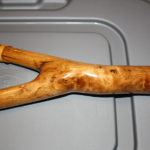 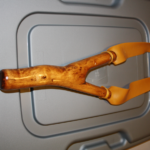 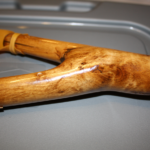 I made this one after the frustration I experienced from my commercial sling shot and not being able to hit anything.  This one works much better, but produces alot of hand slaps.  I think this is mostly due to technique then the slingshot.

I’m working on another slingshot (which does not have the hand slap problem even with my poor technique), but it remains unfinished and I’ll post pictures when I’ve completed it – and take the time to do so.

I’m using tapered theraband gold for bands as well as custom pouches.  You can find theraband on ebay.

As Joerg would say, thanks and bye-bye.